Being filled with the Holy Spirit and activated in Christ is an incredible experience. It can seem like something difficult to understand for someone who hasn’t experienced it yet, but it is the most marvelous, effortless, and beautiful communication that only requires us to turn our gaze toward em’. After being baptized by the fire of the Holy Spirit, I was challenged to immediately hear from Holy Spirit. I was taught to write down whatever comes to mind, whether it be words or a picture.

My Pastor, at the time, asked us this question, “What does God want you to do?”

Being a 20 year old girl with an intense and broken life, I could only think of the answer of school, maybe? Go to church every Sunday? Maybe do what all the other “Christians” do? (The life I have now.. was far too out of reach to even imagine)

Anyway, at this time, I was in the transition of adding to my understanding of who God was. I knew em’ as this supreme being living on his throne in the high heavens, but then I learned that he literally lived in my heart and knows my heart! That God was actually a SUPERPERSONAL God.

It’s to hard understand the vast and infinite love that God has for us because we usually limit him to our own experiences and see him as if he is like the humans we’ve been broken by.

I immediately wrote the words leadership, evangelism, writing, singing, and softball down in my notebook. Now, the softball part became an entirely different testimony and an adventurous journey of Gods active hand in my life and his love for his athletic daughter, but that’s for another time.  So, that night I came home and challenged God on the softball (another story), singing, and writing aspect of his word.

I wrote this song: U-TURN

“My days were dark and my nights were cold – I wondered why I was left alone – One day God spoke to me, he said, “This isn’t your destiny!”

So I made a U-Turn and

So I made a U-turn and

He said, “Those dreams in your heart, I wrote them – they were only for you – I couldn’t be happier than seeing them come true.”

So I made a U-turn and

My church was the most encouraging church you could find. They highly valued uplifting and empowering people; not only in their personal lives, but in the church. So, when it was time for my water baptism, I told them this story of hearing God. Even though my church family had never heard it before, they encouraged me to sing the song I wrote. It took three tries to get past the first two lines, but I did it.

Afterwards, my Pastor encouraged me to start volunteering for the Worship Team and developing my gifts. I was appalled because singing was my secret place. I only had sang, quietly, for a handful of people. Growing up in a tumultuous home and lifestyle, I had absolutely no self confidence or boldness let alone belief in my self. The Pastor would hand the mic to me and I would stay yards away. He would teach me to put my mouth on the mic and to step out in freedom, and I nearly refused. Looking back, it seemed so dishonoring to treat him like that, but that was apart of his call; to encourage, believe, and champion people.

Exodus 4: 4  Moses answered, “What if they do not believe me or listen to me and say, ‘The Lord did not appear to you’?”

Exodus 4: 13 But Moses said, “Pardon your servant, Lord. Please send someone else.” 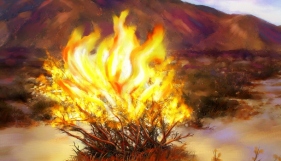 Way before Jesus’ human time on earth, Moses was walking along and saw a burning bush, that in fact, was not actually lit on fire. This bush remained, while the flame burned bright. Anyone raised from a Western Civilization culture to a remote tribe in the Himalayas would find that quite fascinating. Then, a voice comes from it declaring himself God. One would think that Moses would fall face on the ground in worship of some sort, but he doesn’t. He has a conversation with God, asking questions so that he could completely dodge the task at hand. Finally, Moses gets down to it and says, “Please send someone else.” He said that! To God!

But, as shocked as that is, I relate to that. God calling me to worship him in front of multitudes scared me. I did’t feel good enough, important enough, or free enough. I felt like there were so many other people in the world that God could choose to do that (our church was filled with talent). I loved worshiping in the crowd; standing, raising my hands, kneeling, praying over people, dancing, etc. I love people and being apart of the body channeling God’s kingdom, in the trenches, but God wanted something different for me. Something that required his strength, his wisdom, and his ability through me. I could not do it on my own.

The rest of the six months I spent at that church, singing on stage for the youth, was a stressful, heart wrenching experience that grew me as a person and a worshiper. Even though that season was a season of miracles left and right, I still doubted God’s choice for me in wanting me to lead worship. I tried to squirm my way out whenever I could because I saw singing on stage as a dangerous place. My breakthrough didn’t happen til’ years later, during one of my many visits.

I had been in a very dark place and felt so lost. I drove 2 hours to have a night of worship at the only place I knew where to go. As I walked in, I recognized many of the church leaders and elders. I thought I might’ve been late, because there were no youth.

Apparently, this youth ministry had graduated and there were no more to take their place. I had walked right into an intercessory meeting. Immediately, like always, the team asked me to sing and I was hesitant. If my worth was low before it was even lower now. Considering the trust I had built with them, I said yes. My heart was pumping and I asked them what songs were planned. The lead singer said, “Just one. The rest will flow.” Him and the guitarist set up right on the floor level in front of the stage, with no mic stands, and I immediately looked to God and felt peace rush through my bones. The first time I felt peace in months.

I stood there looking up at the singer and we began what came to be an hour worship set of encountering God through spontaneous and prophetic song that was completely led by the Holy Spirit. No melody, no repeating, just encountering the presence of God and what he was doing.

Since then, the Lord taught me that worship has nothing to do with me, it is all about him. Worshiping him, being in awe of him, being a vessel for him, and praising his Holy name.

FROM MOSES TO MIRIAM

Exodus 15: 20-21 : Then Miriam the prophet, Aaron’s sister, took a timbrel in her hand, and all the women followed her, with timbrels and dancing. 21 Miriam sang to them:

Sing to God—
what a victory!
He pitched horse and rider
into the sea!

Not knowing Jesus, made me so insecure. But through life and building my faith with him, I have come to trust him and know his beautiful, crazy, and mysterious ways!

The victories that the Lord has won over my life propels me into worshiping him! It propels my prayers to be prayed from victory and not for it. Not only on stage or in the crowd, but in the car, on the street, at work, and always I am worshiping our faithful and glorious father. I feel as though I am always Miriam; the prophetess with her tambourine celebrating the victory of God. Not wavered by the expectations or limitations of man but empowered by the grace and power of our great and limitless God.  Nothing is impossible through him! The universe and the earth praise his name and abide in his word and I pray that I have more and more courage to do the same!

Where are you believing is a dangerous place, where it actually isn’t dangerous at all?

What is the deepest desire of your heart?

Where have you seen victory?

Fill your day with love and happiness.